Oklahoma to the Outerbanks 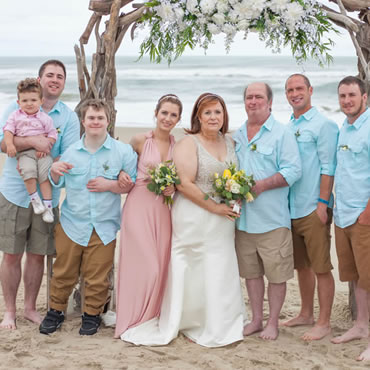 In trying to figure out how to say goodbye, how do you live?

What do you pack for what some say will be your “last family trip?”

How do you get on an airplane, fly hundreds of miles, when your eyes blur with tears, making it difficult even to read the instructions to your next gate?

How do you smile and put on your game face, while everything inside you is twisted and wrenched making it near impossible to catch your breath?

You put one foot in front of the other.

You take one step at a time.

Until finally… you arrive.

To get us to that point though, I need to fill in the missing blanks.

Through, what some may call, coincidence, or even fate, several months ago a miracle began to unfold as I reached forward to answer an incoming customer call, something I do hundreds of times per week.

I have thought back to that October day many, many times over the last several months, smiling, I know there was nothing happenstance about the direction of that call.

There’s a saying I’ve heard; a coincidence is a miracle in which God chooses to remain anonymous.

I agree 100%… He used ordinary people to become extraordinary heroes to our family.

My customer was, like me, a mother. Purchasing items for her home, while making sure that the sensory challenges her child deals with would work with the fabric and textures she chose. As I listened, I honestly have to say, that I felt a drawing to her as a mother. I, too, have a child that is bothered by scratchy, uneven, textures. I felt in my spirit, to share the purchases in the same line she was considering, I have myself made, and that works well for my son.

I’m embarrassed to say; I almost stayed silent. Once, twice… not until I felt my heart prompted the third time and an opening presented itself did I speak up to share my information, that’s when I’m not certain, but I believe, this woman listening with her heart, heard the crack in my voice… or perhaps even still, she heard the breaking of my heart.

You see, as much as I love him and am concerned with every aspect of his being, my son with special needs was not what was threatening to consume me that afternoon. We had just learned that Matthew’s Daddy, my husband of more than three decades, had, according to doctors, only months to live.

In my sadness, God set into motion a gift, a plan, for our family. The caller innocently asked, “If your husband could do anything, what would it be?” As I sat for a moment pondering that question, I settled on something I knew would bring him more joy than riding a bull for 8 seconds or racing a car around a track at over 100 mph and that would be spending family time together.

Where? Now that would be a bit harder to answer, but I quickly remembered a long weekend we had spent in Virginia Beach years ago, and as I closed my eyes, I could once again picture the time on the beach… with not a care in the world, walking, chasing waves and collecting seashells. I could hear the laughter of Don mixed with the delightful squeals of our then, only son, and I knew… that’s what he’d want… another magical time at the beach.

That call, set in motion events that quickly came together as people we’d never met or most likely, would never have come into contact with, shared my husband’s story. Those people then shared and on and on, until finally, Kim Sproles, with the Healing Hearts Respite Foundation heard his story.

Over the next weeks and months, a plan came together and finally in April we received clearance from Don’s Oncologist and medical team for him to take a few weeks off from treatment. According to his Doctor, this was just what the doctor would order.

The weeks prior had been brutal on Don physically, but even more so emotionally, as he struggled to keep fighting. Not wanting to give up, yet fearing, he may not have the strength to continue, this time of respite would do more for him than relieve the physical exhaustion. It would provide, quite simply a time to rest. A week to shut out the world with the treatments, surgeries, drugs, and appointments that filled our daily calendar.

As they removed his pic line and readied him with medication for our adventure ahead, I couldn’t help but wonder, what the time off would mean to cancer that was rapidly spreading?

Holding tightly to our belief, that no matter what lay ahead, God was in control. I was sure, no one other than Him, in His grace and mercy could have orchestrated the avenues that had lead us to this very moment.

Days later we flew into Virginia Beach; but our vacation would take us further south, down the coast, to Corolla, North Carolina, where a yellow house beaconed us home.

As we climbed the steps to the front door, our hearts, weary, worn, battered and bruised from the fight against the ravages of cancer and it’s treatments; we dared to take a little deeper breath, then another.

Over the next several minutes we quickly set our things inside and then did what anyone that is from land – locked areas would do… we set out to find the nearest route to the beach!

Thankfully, we quickly had our toes in the sand and the salt water breeze blowing across our faces. With each incoming wave, our bottled – up tension seemed to be carried, further and further, out to sea.

Minute by minute, we dared to keep our eyes open and take in every single moment of God’s goodness. As Don and I walked down the beach, we reached out for the other’s hand and sent up a prayer that God would use this week as a time of healing, not only physically, but spiritually and emotionally for our family. Oh, my… we got so much more than we could imagine.

Hour by hour, sometimes, even minute by minute something new unfolded and just below the surface was a new and wonderful gift, in the form of an embrace, laughter, even the wiping of a tear.

We met, as we call them, the “fabulous four” early into our trip… Kim, Hope, Melissa, and Katie, from Healing Hearts Respite Foundation. Each one on assignment, I’m certain, directly from God to speak into our lives individually and collectively as a family.

There’s no better way to get to know someone than to break bread with them, just imagine, if it’s an entire shrimp boil FEAST! As the food was heaped onto our plates, God’s love was poured out over our gathering. Before the night was over, our families formed a forever bond with these four incredible women.

The days that followed included many surprises. One, a wedding that, as little girls, we often only dare to dream. This time, it was no dream, it was instead a picture perfect vow renewal on the beach in the beautiful Outer Banks. Me, the not-so-young, bride wearing a custom – designed wedding gown, standing under an arbor of driftwood and cascading flowers, exchanging vows with the love of my life, promising that we still do… forever and always. 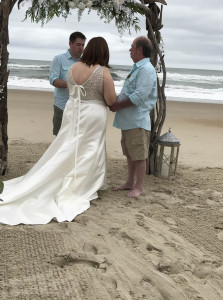 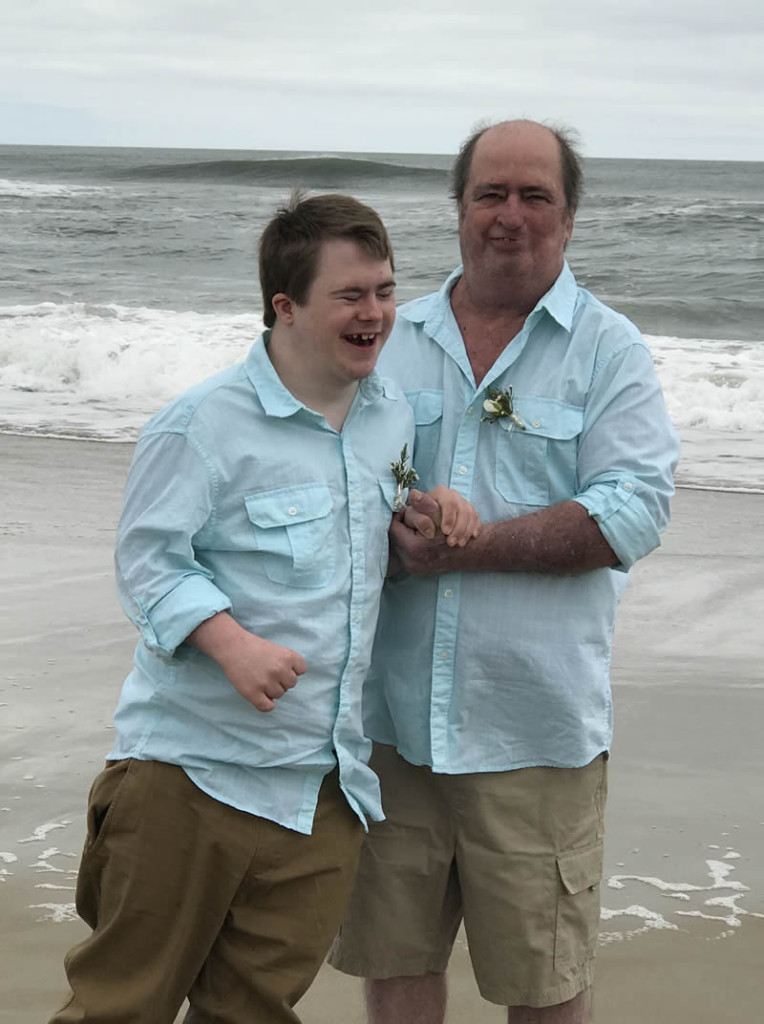 Healing Hearts Respite Foundation afforded us the opportunity to believe again, to hope again, to live again. We’ve learned through this journey, and the many previous medical issues with Don and Matthew, that life truly is fragile. Every day is a gift. Not always wrapped up in North Carolina sunshine… but always brighter when shared with those you love.

We came home with an array, of souvenirs, but the one thing that each of us chose among our various t-shirts, sweatshirts, and key rings… was something with the saying, salt water heals everything.

That it does… when you mix it with a yellow house, sand, laughter, caring hearts and God’s love.